When it comes to political or social justice of any kind, Black women have served as pioneers. We’ve run for office, given speeches, marched in the streets, reported on current events and created artwork to reflect the times. Kamala Harris, the very first Black woman Vice President of the United States is soon to be elected and in her own words, “I won’t be the last.” When it comes to progress we must balance thanking our foremothers, celebrating the work that we’re doing now and looking towards our youth to lead us into the future.

Here are 20 Black women political pioneers to celebrate because they’ve given us so much. 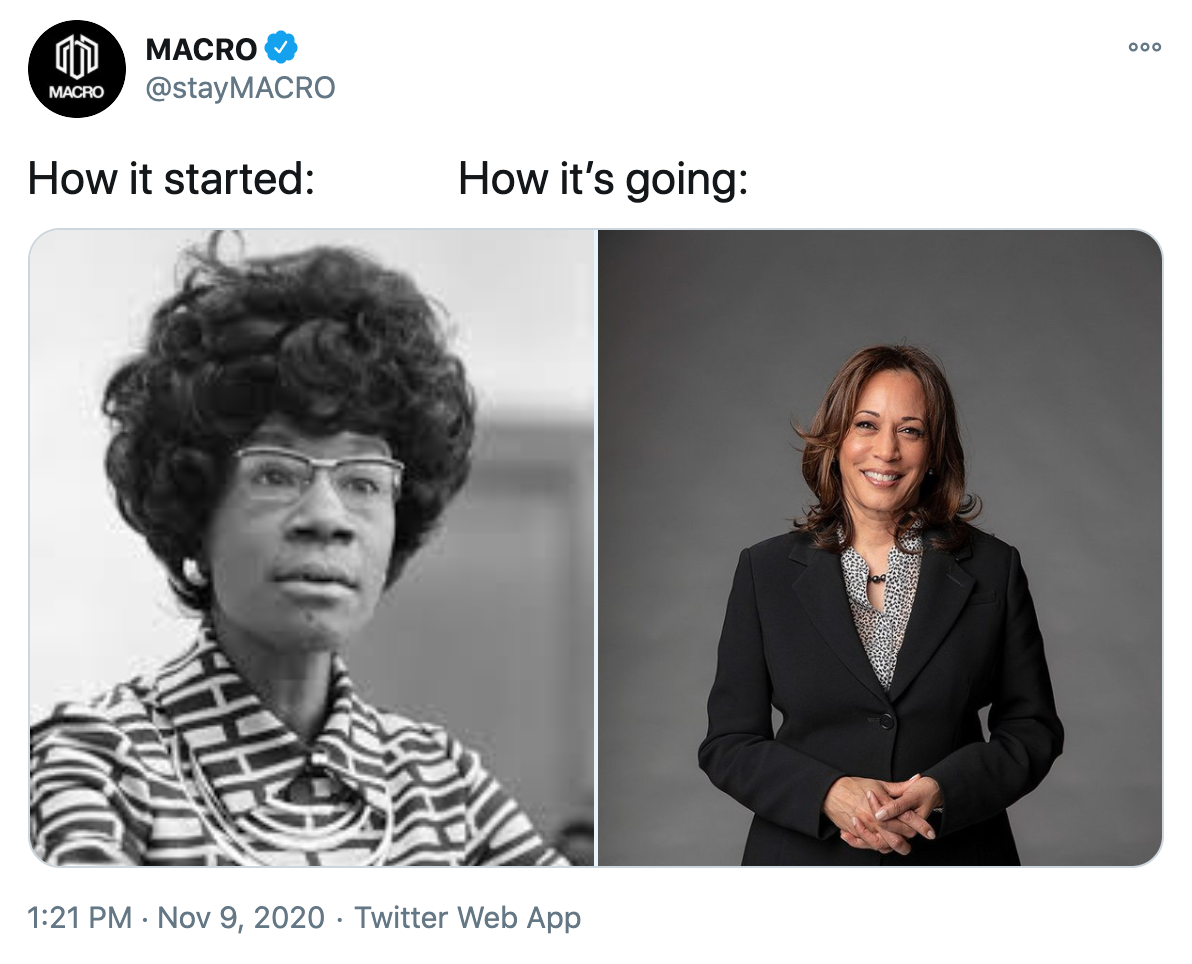 As an advocate for women and people of color, Chisholm was a co-founder of the National Women’s Political Caucus and became the first Black woman to serve on the House Rules Committee. Running for the Democratic Party in 1972 and her undying commitment to improving the lives of marginalized people opened the doors for some of the most significant Black women in politics today. Not only for soon-to-be elected, Vice President Kamala Harris and former First Lady of the United States Michelle Obama, but the incredible Stacey Abrams whose leadership and advocacy contributed to the election of Joe Biden as President of the United States.

2. Florynce Kennedy – (One of) The First Black Women To Graduate from Columbia University’s Law School (Photo from Wikimedia)

Described in People magazine as “the biggest, loudest and, indisputably, the rudest mouth on the battleground”, Florynce Kennedy was a catalyst for change who used her flamboyance and education to her advantage. Her iconic staging of a “pee-in” in protest of the limited restrooms for women at Harvard is just one of her many acts that demonstrated her passion for social justice. Kennedy paved the way for every Black woman activist to be outspoken. Other activists like Angela Davis, Alicia Garza and Tamika Mallory have followed in her footsteps by holding governmental organizations accountable while introducing new ways of dismantling discriminatory systems/practices.

As a leader of the Stonewall Riots & overall architect of LGBT rights, Marsha P. Johnson paved the way for queer people, particularly trans women of color, to have the same rights as everyone else. The “P” in her name stood for “pay it no mind” which is what she often said to people that questioned her identity. Leading with love and light, Johnson was a trailblazer who led the way so that activists like Raquel Willis, Laverne Cox & Indya Moore could continue to make change. By giving herself permission to be who she was, she set the precedent for activists and allies to do the very same while in pursuit of justice.

4. Ida B. Wells – The First Black Woman Investigative Journalist (To Own Her Own Newspaper) (Photo from Timeline)

Through investigative journalism, Ida B. Wells became a civil rights leader and a foremother of the National Association for the Advancement of Colored people. It was in facing discrimnation because of her race and gender that she started writing about her experiences and investigating that of others. Wells’ commitment to the antilynching and women’s right to vote movements were critical to her work and advocacy. By using journalism as a tool to pursue social justice, she made it possible for women like Oprah Winfrey, Gwen Ifill & Yamiche Alcindor to get to the bottom of the causes and events that affect us most.

Who are the Black women heroes in your life? Let us know in the comments below!