Where I’m Going First When Outside Opens Back Up

The first time that I ever traveled was for my second grade class trip to Sacramento, CA.

I remember getting to the airport and feeling so tiny standing near baggage claim — but also extremely curious about everything around me. Around that time is also when I first started to notice the excitement my Dad felt whenever he had to travel for work. I saw how much joy it brought him, and how excited he would get whenever it was time for him to head out.

My Dad traveled pretty often for work: he’s an original member of a band that had major success in the ’70’s. Because of their songs, his band is still being requested by event planners all over the country. I never really knew until I sat down to write this piece that much of my own identity as a traveler (and a creative), stems from my Dad and the joy I witnessed him feeling whenever he was preparing to create, or travel to somewhere new.

For me, these two things — creativity and travel — go hand in hand.

I’ve often felt my most open when I’ve been traveling, and that always seems to jumpstart my creativity. That’s not always the reason why I’m traveling in the first place, but I appreciate the inspiration.

My dad traveled for the first time when he was 18: he’d joined a band that was headed for Austria (or was it Switzerland? ) either way, he was headed to a place where he didn’t speak the language or really know anyone, but he was excited about it. And I still feel that every time that he re-tells these stories. It’s the memories for me; when I think about his trips and the ones that I’ve taken on my own, or with friends and lovers.

And with quarantine cutting off the opportunity to travel anywhere the time being, I’ve been thinking more and more about what travel — and the places I visit — really mean to me. So without further ado, here’s a list of places that I’m considering for my first travel trip post-pandemic.

But now that we’ve been “in the house” going on a year, travel seems so far away. Travel memories, travel opportunities…all of the travel things are starting to feel the way “we’ll be getting our stimmies soon” sounds. Thinking back on the last time that I traveled, it was one of the hardest and best trips of my life. This past August I moved from Los Angeles to New York.

I’d been dreaming of this move since I was about four years old, which was also related to an elementary school experience. One of my favorite teachers told me that’s where she went to school, and because of how brilliant and beautiful she was, I knew I had to do the same. Now that I’m here, I’ve definitely enjoyed myself and still have more exploring to do.

Transitioning out of sheltering-in-place will be just as difficult as going in. There will be a lot to get used to and a lot of caution that will still be required. All in due time, at my and my pocketbook’s leisure.

I hope, sooner rather than later, we can come to an understanding as a nation on what it takes to protect ourselves and others. Because I miss outside and I think a nice flight will help me to figure out where I see myself living longer term — that is, until I get the next travel itch. 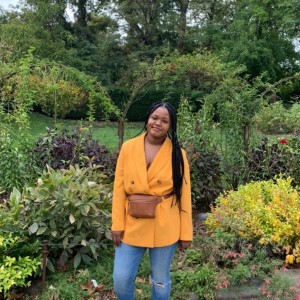 MORE POST FROM THIS AUTHOR
PrevPreviousAn Ode To My Pisces-ness: How My Zodiac Sign Taught Me To No Longer Be Ashamed Of My Sensitivity
NextTina Turner’s Freedom Of Expression Taught Me And The Black Women In My Life To Be UnapologeticNext